In the recent past, I’ve often heard my friend say this while conversing with her 9 year old daughter. No matter what the topic or kind of discussion, she invariably uses this phrase. Initially it rattled me but soon I realised that it was actually her way of bringing the conversation to a close!

It brought back memories of the 8 long years I spent with my close friend as she brought up her two daughters. I’ve seen both children from birth and much of my knowledge of how to deal with children has largely been influenced by her.

I’ve hardly ever heard her raise her voice with the children. No matter the situation, every temper tantrum or hurt ego or in response to the quintessential ‘why’, she would ‘talk’ them through every one of them. Her in-depth understanding and patience in dealing with different situations was mindboggling. I distinctly remember the incident when she was potty training her younger child. Now this almost 3 year old, loved dressing up and hated her clothes being dirty. The house-help complained that no matter how much she cajoled the child, she still did potty in her panties and refused to go to the bathroom. My friend looked at her child for some time and then gave her a tight hug and made her sit on her lap. The house-help wasn’t pleased! But instead of scolding her, she began talking about all the beautiful clothes she had in her cupboard and the new dress that she would soon buy for her 3rd birthday. There was visibly much excitement in the child now who realised that instead of scolding her, mother was talking about her birthday dress!

During this animated conversation, my friend slowly added that the panty in which she had done potty would also need to be put in the same cupboard as the new dress. It would upset the new dress to share her space with this dirty panty. Even her other clothes would not want to talk to the panty because she had soiled it. The gradual look of comprehension on the child’s face now was truly inspiring. They discussed how the panty needed to be very clean before she could be put back into the same cupboard. As my friend brought the conversation to a close, the child agreed that from the next time she would go to the bathroom instead.

I must add that while this discussion was happening, I was desperately trying to control my laughter but on hindsight I couldn’t ignore the serious underlying discussion that actually happened. Her innovative thinking blew me over and I knew that if I ever had a child I wanted to be a mother just like my friend! 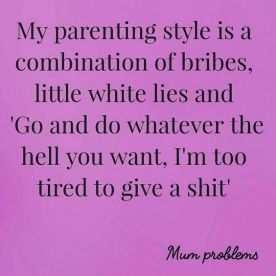 Since the birth of my daughter I have sincerely tried but I continue to struggle to build that kind of rapport. As a person I’m short tempered and very low on patience. Therefore, as a mother, most often, I’ve found it relatively easy to simply inform her of my decision. And yes, there have been occasions when I’ve told her, ‘because I told you so!’

By the time she turned 2 ½ years old, I had to change my stance. As you can well imagine, that phrase made no difference to her, solely because it made no sense to her! Simultaneously she had started talking using a vocabulary that was an interesting (and annoying) mix of Bengali – Hindi – English – Kannada! Trying to understand her was a challenge and I didn’t want to make my life any more difficult. So I consciously tried to stop myself from using that phrase and amidst (still) losing my cool, I began to talk her through things.

One of my first lessons included teaching her not to use the word ‘shit!’

Yes! She picked up the word from me. No excuses, but everyone who drives in India (no matter how good hearted and nice) use foul language. I do too, although feel that the words I use are relatively harmless. Anyway, one fine day, while driving her back from preschool I used the word ‘shit’ and by the time we returned home, she had adopted it into her vocabulary! The interesting thing was that she had realised that I had used that word to express frustration. Soon after, if she dropped a toy or water fell on her or a crayon broke, she would say shit! In the first instance I panicked, then I got angry and told her not to use it but the lady started testing my patience. She would say it and wait for my reaction. To get out of the situation, I told her to simply say ‘shoot’ instead of shit. It worked for a while but then she would say both words in quick succession! Grrrr!!!

Now, my husband’s a photographer and enjoys teaching her how to use the camera. She too loves posing for him. So I went a step further and explained to her that shit actually means potty and we shoot with a camera.  Somehow, this made some sense to her. Now if she says the words, she also explains this same concept back to me. It’s helped to reduce the impact of the words and she doesn’t use it as often. It will take time to stop completely (I hope :-p) but I’m ok.

That brings me to another conversation with her. My daughter is a diehard Chota Bheem fan, so some weeks back at night when I was showing her the moon; she wanted to know where sun had gone and why he wasn’t there. So instead of giving her an explanation, I told her a story. I explained that like Chota Bheem and Chutki, sun and moon were best friends. One day King Indravarma tasked them to light up the world and they had to do it every day. They struggled to find a way to do that without ‘nini time’ (read resting or sleeping) and went to Chota Bheem for help.

Chota Bheem always stands by his friends and never lets any harm come to them. So he explained that they had to help each other by taking turns, so sun would light up the world in the morning and moon would do that at night. It meant that sun would do ‘nini’ (sleep) when the moon was shining and moon would go to bed when the sun came up. The friends were delighted to hear this and that is why she could only see the moon now as sun was asleep.

She accepted my explanation without question. Next morning, when she saw the sun, she excitedly clapped her hands and said, ‘sun has also woken up!’ I was more excited than she was to see that the story worked 🙂

My daughter will turn 3 years in another month’s time and I can see her thought process developing as she associates concepts in her own simplistic ways. I’m enjoying this phase and learning newer ways to respond to her by using things, characters, words, toys from her surroundings that she understands.

Sometimes I’m scared too. I fear failing to make sense or give her the right answers. I fear that in my attempt to talk her through situations, I might be incorrectly attributing certain qualities to people or teaching her to respond to situations just like I do, meaning I fear that perhaps I’m making her just like me! My husband says I shouldn’t do that as she has to learn ways to deal with situations on her own. So I fear being torn between telling her the right way and my way. I fear being unable to respond with clarity as she grows and her questions become difficult or probing. I fear that perhaps then I might readily revert to telling her ‘because I told you so!’

Will I be able to continue talking her through life while being prudent, non-judgemental and fearless? Will I be able to allow her to speak her mind without prejudice? Am I up for the challenge?

(Because I told you so! was first published in Momspresso (formerly mycity4kids) on June 8, 2015)